We will pick you ııp in the morning from your hotel and start our full day Cappadocia tour. Pick up time is between 09:00 and 09:30, depends on your hotel. The tour starts at Uçhisar Castle, 60-meter-high fortress, which was not built, but carved out of natural hill dominating the area. This fortress is the highest point of Göreme region. Here you will make some unbelievable photos of unusual landscape of Cappadocia. Afterthat we will proceed to Göreme, a small town in the çenter of Cappadocia vvhere we will visit Göreme  Museum.

Göreme Museum consists of steep cliffs and many hidden churches dating from Byzantine time. The vvorld’s most important Byzantine cave churches are found in these önce remote valleys vvhere monks pursued monastic life from the 3ra century on. Here you can see the best preserved Byzantine cave wall paintings and frescos from the Iconoclastic period until the beginning of the Seljuk rule, which show scenes from the Old and New Testament. After visiting the museum, w e will continue to Avanos vvhere we will have our lunch.

Avanos is a small town, knovvn for its ceramics and it overlooks the longest river of Turkey, the Red River. Red River; old name Halys; in ancient times was the border betvveen Asia Minör and the rest of Asia. River is the vvitness of two majör events in history that had occurred there. 585 BC the Halys River was the place of famous Battle of Halys; the first battle in history that is knovvn the correct date (May 28 585 BC – Battle of the Edipse).

Two and half centuries after that, during the time of Alexander The Great; Alexander knew and said if he will vvant to come to the end of the vvorld, he will have to be able to cross the Halys River; and in 333 BC Alexander has succeed in his venture. The most famous historical feature of Avanos, vvhich is stili relevant and very visible today, is its production of earthenvvare pottery. The ceramic trade in this district and its countless pottery factories date back to the Hittites, and the ceramic clay from the red şilt of the Red River has alvvays been used. Today, Avanos is the pottery çenter of Cappadocia and we will visit a pottery atelier and shop.

There you will have a chance to vvatch the potters at work using kick vvheels, the technique vvhich has remained unchanged for generations. You vvill have a possibility to buy yourself a unique handmade souvenirfrom Cappadocia. After that vve vvill continue to Çavuşin Village, one of the oldest villages in this area. İt is an oid Greek village and the most important building there is a Byzantine church of St. John the Baptist. Then vve vvill proceed to Paşabağı, also called the Monks Valley because Christian hermits chose to locate hermite cells and churches in three-headed pinnacles symbolic of the Holy Trinity.

There you vvill see some of the most striking cones in Cappadocia with twin and even triple rock caps and they are knovvn as the mushroom-shaped fairy chimneys. Our next stop vvill be Devrent Valley, also knovvn as „lmagination“ or „Dream Valley”, and it is the most surreai-looking scenery. This valley is famous because of its lunar landscape. Continuing our tour, the route vvill take us to Ürgüp vvhere vve vvill make a photo break at Three Beauties, the symbol of Cappadocia. There you vvill enjoy the sun vvhich slovvly sets över Cappadocia. Anticipated return to your hotel is approximately betvveen 16:00 and 16:30 o’clock. 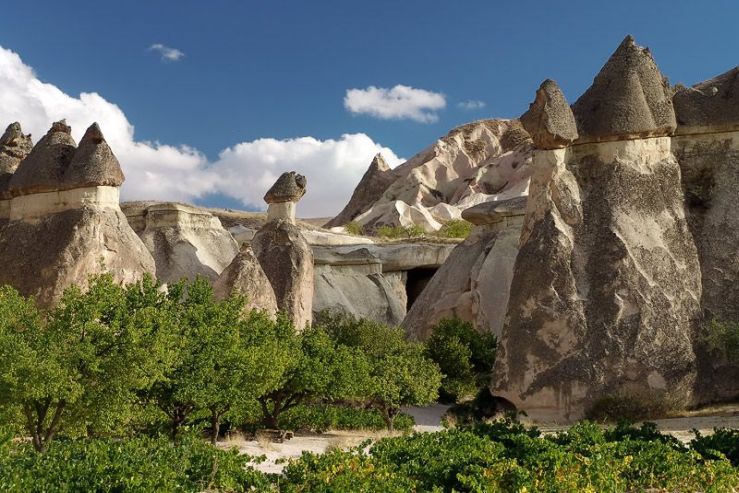 One tour per person
Daily Tours