Blue Tour Attractions:
Mustafapaşa Village
Keşlik Monastery
Taşkınpaşa Medrese
Sobessos Ancient City
Soğanlı Valley
Underground CityWe will pick you up in the morning from your hotel and start our full day Cappadocia tour. Pick up time is betvveen 09:00 and 09:30, depends on your hotel. The tour starts with visiting Mustafapaşa Village, an old Greek village vvhich is famous for its beautiful arehiteeture, vvhere the vvarrens of grottos are hidden behind statuesque neo-clasical façades. It’s former name during the Ottoman Empire vvas Sinassos (“city of the sun”), and it vvas one of the largest Greek settlements in Cappadocia until the beginning of the 20® century. Throughout the region the town is knovvn for the ornate carved stonevvork of its houses. The next stop is Keşlik Monastery, vvhich is consist of 3 churches, refectory, sleeping and living quarters that vvere carved out of the rock.The monastery is knovvn as one of the rare Iconoclastic examples of Cappadocia frescoes and it vvas used in Byzantine Era until the end of Ottoman Empire. Then we will continue to Taşkınpaşa, a typical Cappadocian village, vvhere vve vvill visit Taşkınpaşa Medrese (theological school) and an antiquated mosque, both built in a classical Seljuk style. The Medrese vvas built by the Karamanids, a 14lh century dynasty in Konya, that dominated this part of Anatolia for almost 250 years. in Taşkınpaşa Village we will have our lunch.After the lunch break ourtour vvill continue to Sobessos Ancient City, the only late-Roman/early-Byzantine settlement in Cappadocia. İt is originally a Roman settlement from the 4lh century AD. We vvill visit the excavation site vvhere you vvill be able to see, among other typical Roman buildings, a 400 m2 meeting hail, the main attraction of vvhich is the beautiful mosaic flooring. By sightseeing the excavation site you vvill realize hovv finding Roman ruins of this sophistication provides evidence that there is stili a lot vve don’t know about the history of Cappadocia. İt is knovvn that Christians vvere for the most part hiding from Roman soldiers, but there has never been any evidence of a fuli-scale Roman settlement here.

After visiting the excavation site vve vvill proceed to Soğanlı Valley, a deep vailey vvith interesting hiking trails. Soğanlı vvas önce the third largest monastic çenter in the area and hosts many cave churches and monasteries, most of vvhich are from the period betvveen 9lh and 13* century. Soğanlı is famous for its vvorldvvide knovvn dolls that have become the Symbol of the village. We will spend the afternoon hiking through the valley, enjoying the beautiful and untouched nature.

Our tour vvill end by visiting Kaymaklı Underground City, where we will descent tovvards the centre of earth by exploring the second biggest underground city in Cappadocia; vvhose capacity vvas approximately 4 000 people. This city is about 20 metres deep and contains ali the usual rooms founded in an underground city (kitchens, storehouses, living quarters, vvine cellars, church, ete.). Anticipated return to your hotel is approximately betvveen 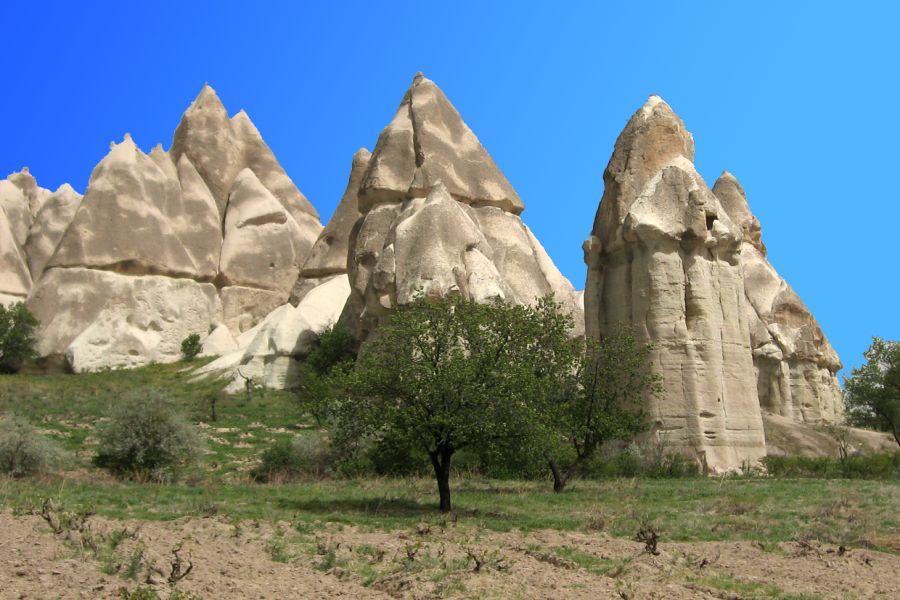 One tour per person